After much contemplation and digression, I finally plucked up my courage and decided to get my brows done!

Okay guys, I've been researching diff places and reading reviews of almost every kind of embroidery.. haha I took 2 nights for that. Texted some of my friends and enquired on their satisfaction from the various brow salons they visited too! I'm damn kiasu but c'mon, it's my first virgin brow embroidery! And I don't want to screw up!!! Haha

I had the usual brow salons in mind, like brow haus and errabelle. I went down to enquire on their services as well as prices. YES, the price. Brow haus quoted me 2k for their latest gradient brow and boyf say I must be mad to spend that kind of money on EYEBROWS. (he doesn't understand since he has so much brows) 🙄 he pulled me out from the plaza sing brow haus outlet when I actually asked them for their earliest appt and said we'll consider HAHAHA. Oh well.

Being such a sweetheart, he helped me with my research and we came across @gentle_cactus on Instagram! Price range was abt $400-600 but boyf says he likes the microblading effect and it will look more natural as compared to one huge dark mess of black brows. Hahaha, can u believe it, he was more concern than I was with my brows!! Hahahaha so in short, I made my appointment and decided to just cross my fingers and toes… let's see how it goes!!!!

BEST DECISION EVER I SWEAR!!! 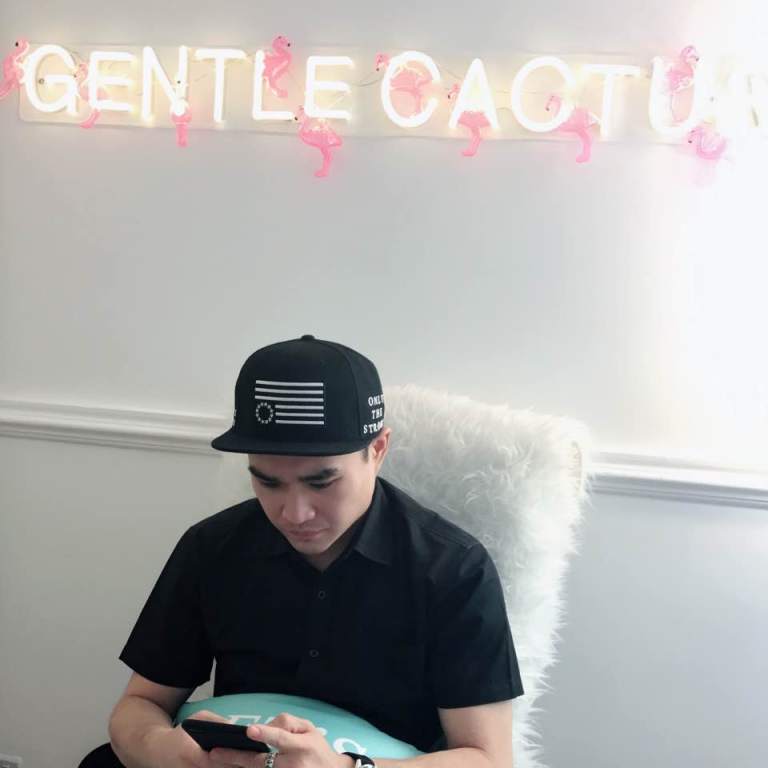 Settled down in a room of her place and she did it up so nicely! I love how cosy the room was with fairy lights, a huge ass mirror with exposed bulbs, a comfy bed with duvet sheets, soothing music and most impt, AIR CON! 😌 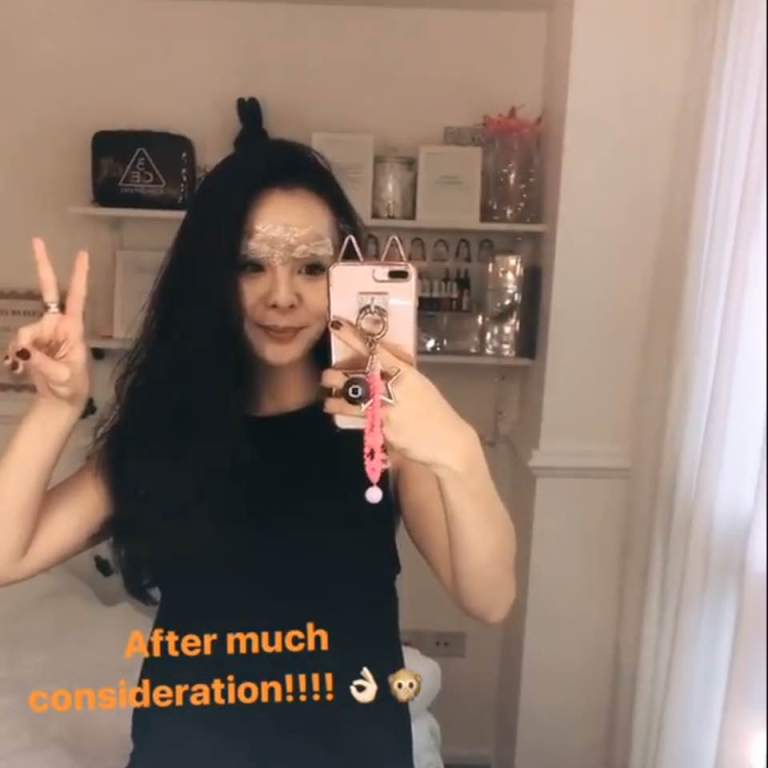 Screenshot this from my instastories! But haha huge ass mirror that I was talking abt!

First, she asked me what I wanted with regards to the shape, Colour and expectations. I told her that i wanted something close to my natural eyebrow shape and wanted the effect of drawn brows. She explained that the microblading technique would be very natural and might not be "enough" for a full face of heavy makeup. Taking into consideration of my work makeup, she told me that I would best suit the mix of microblading/ powdered brow.

Basically, it means that I would achieve a fuller bushy brow with a gradient effect! Starting lightly from the front and darker at the ends. Sort of like a permanent brow makeup look I think? 🤗 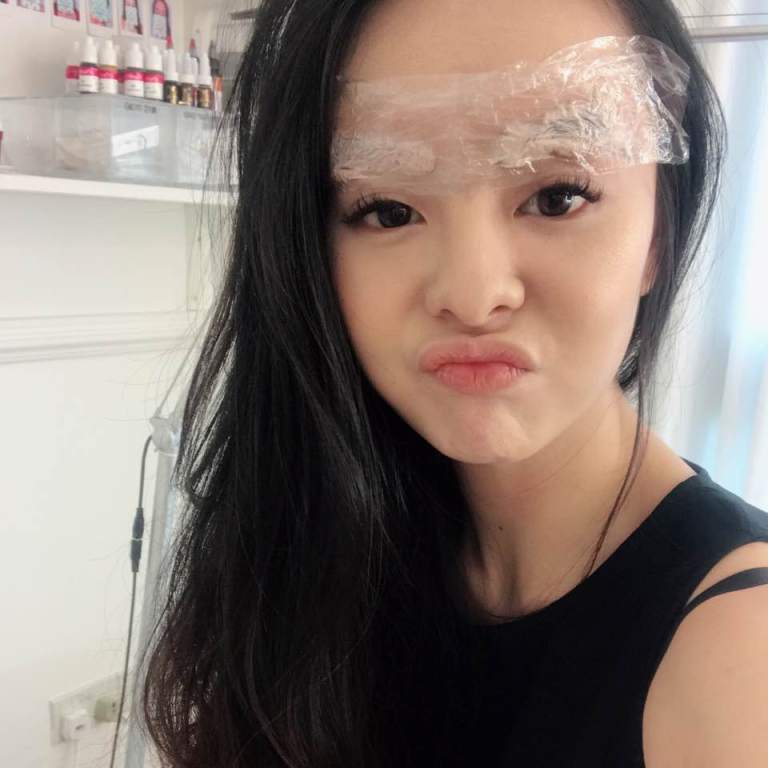 She drew up the shape to my liking before putting on the numbing cream. At this point, I was kinda scared. I've heard horror stories of how painful it can get and not to mention bloody… when the brow embroidery has gone all wrong 😖😖😖 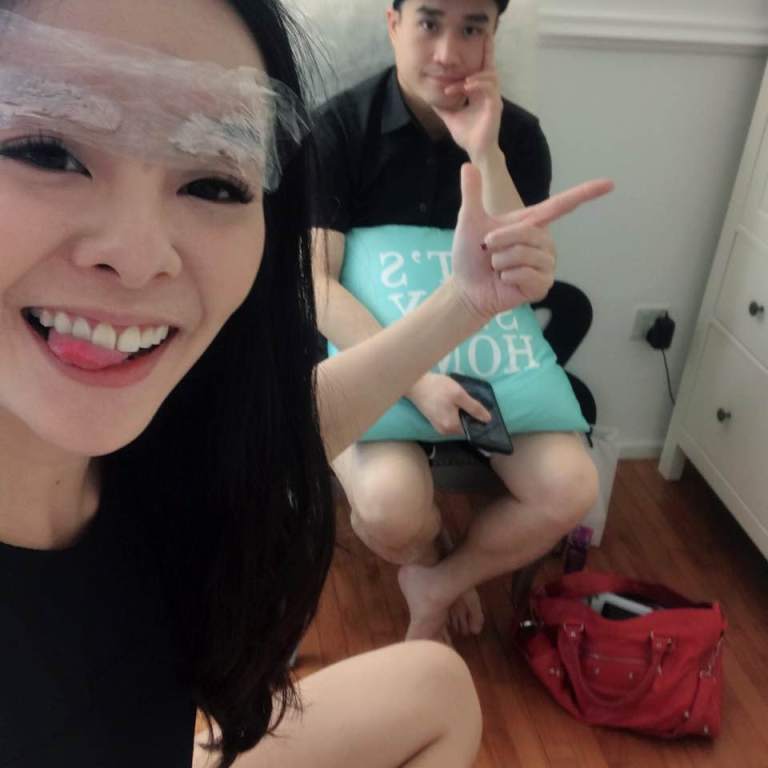 She left us both in the room for 40mins for the numbing cream to set in. I guess all the fear was forgotten then!! Haha started goofing ard…. 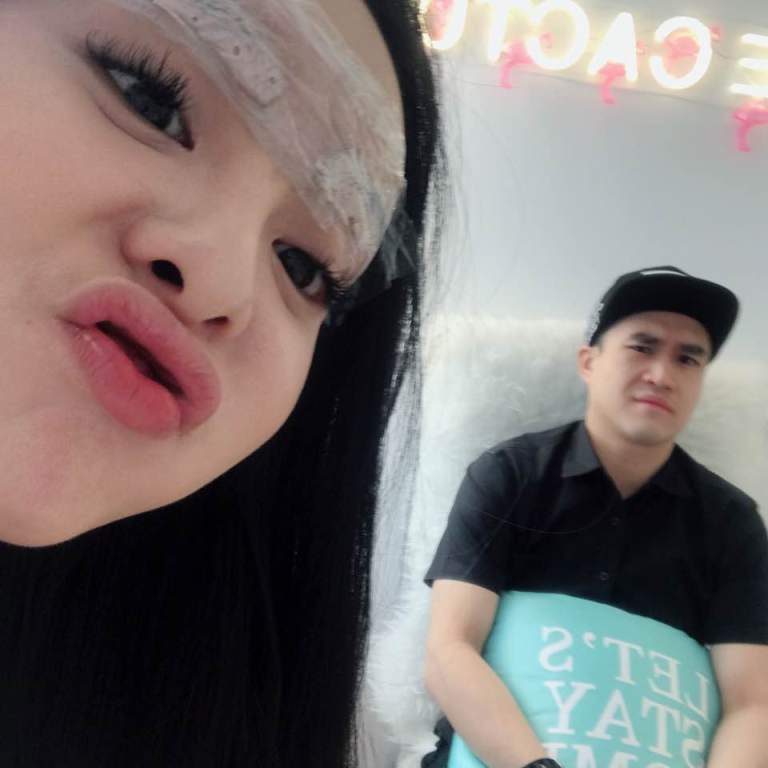 Non edited photo of my brows right after the treatment!

All in all, I'm SUPER SATISFIED with my brows! She took about 2 hours to get everything done.. from drawing to numbing cream to applying the ink. It was pretty painless! Only towards the end when she was touching up.. the numbing cream was wearing off then. I could hear scratching sounds while she was doing my brows and haha it was frightful. BUT NO PAIN! Just weird sounds which I assume might be pain. All in my head hahahahahah 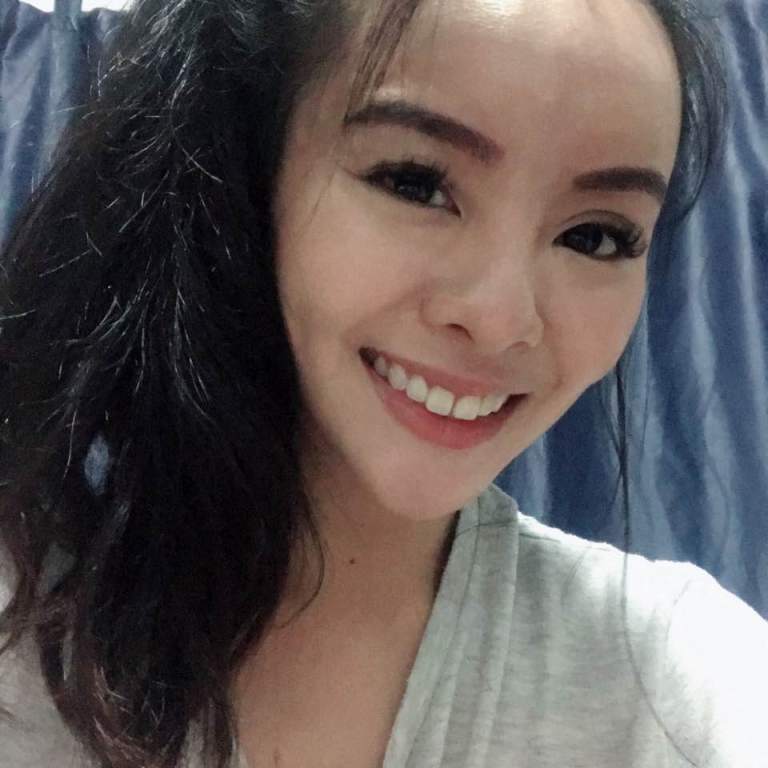 Came home to take some selfies and admire my brows before it flakes off? She told me the Colour will drop abt 30-50% 😩 I like it like that!!!! 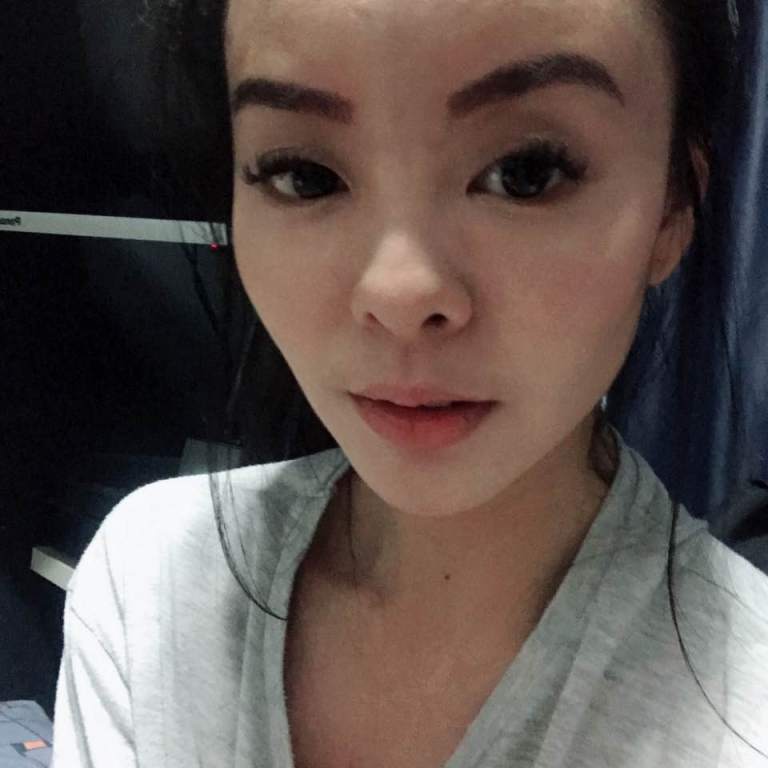 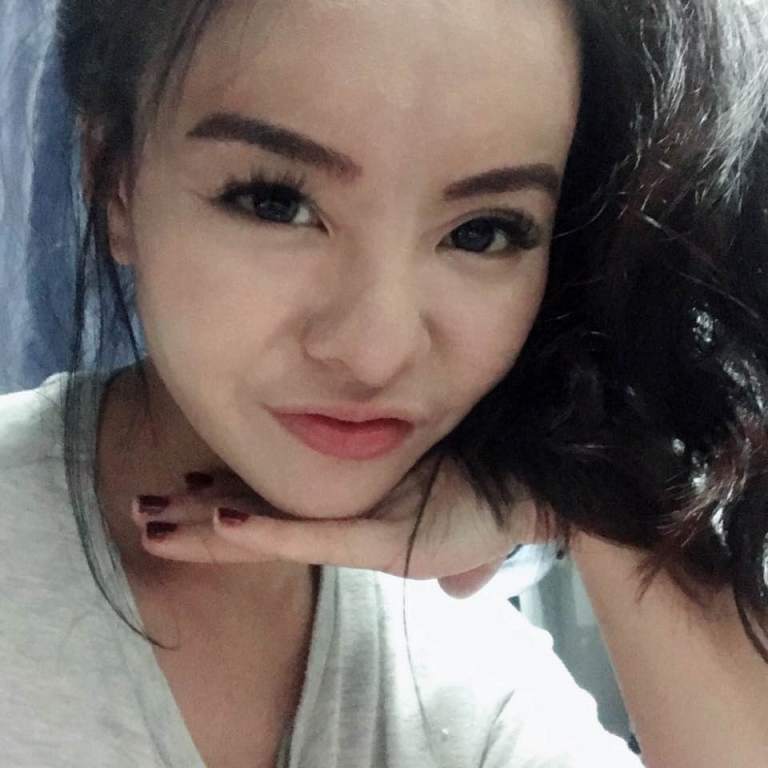 So for many of you girls whom are interested….

I did the 6d gradient eyebrow embroidery! It cost $580 but I promise you it'll be the best money you spend on your brows! 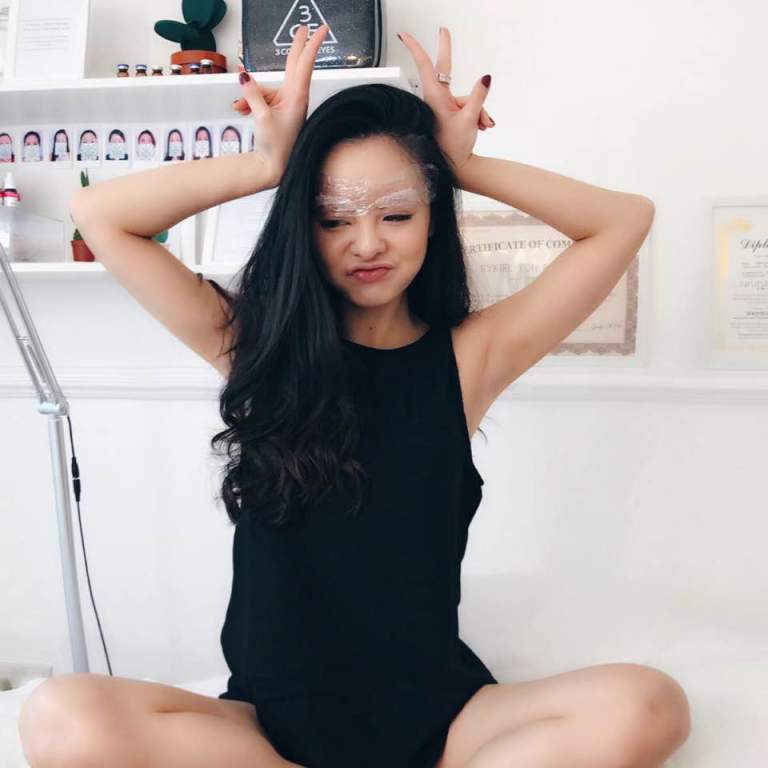 Ending off with a goofy pose! Hahahahah

Refer me! Leanne Low, when you're making an appointment!! 💞💞💞 #notsponsored